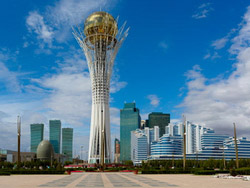 The monument was built in 1997 as a symbol of transferring the capital from Almaty to Astana. The author of the project is well-known English architect Norman Foster. The height of the building is 97 meters, with the ball, crowning the construction - 105 meters. Diameter of a gilded ball is 22 meters. The lower level goes down four and a half meters below the ground, where there are cafes, aquariums and minigalery Baiterek. From there you can also rise on the elevator, on the very top level - the ball, inside of which bar and panoramic room are located.

Bayterek which in Kazakh means poplar symbolizes a notions of ancient nomads, according to which at the turn of the Worlds, flows the World River. On its bank stands the Tree of Life - Baiterek, holding land with its roots and supporting heavens with its crown. The roots of the tree are respectively located in the Underground Kingdom, while the crown - in the Kingdom of Heaven. Every year, a bird, named Samruk, lays its egg in the crevice - the Sun, which is swallowed by a dragon named Aydahar. That symbolically means alternation of summer and winter, day and night, the struggle of good and evil. Baiterek means young, strong-growing tree, symbolizing the state, preserving its historical roots, with strong support and aspirations for future prosperity.