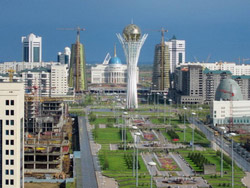 This is a wonderful city unique for its beauty, architectural buildings, monuments and the rich history of development. It was renamed several times, until 10 January 1997 it was called Akmola, and in 1998 was renamed into Astana (from Kazakh Astana - «capital»). In the 20 century, it had a name- Akmolinsk (starting from 1961) and later Tselinograd (during the USSR period). In 1997, by a decree of President Nursultan Nazarbayev, Astana became the capital of Kazakhstan. The decision was motivated by the advantageous geographical location in the city center at the intersection of major transportation routes, availability of appropriate transport and information infrastructure, vacant land for development of the capital. And very soon, Astana had become the epicenter of economic, political and cultural life.

The city is located in central Kazakhstan, on the River Ishim in very flat, semi-desert areas, which constitute the majority of the country. The elevation of Astana is at 347 meters above sea level. 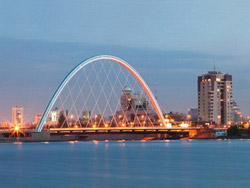 Now the population of the capital already exceeded half a mark. As of April 1, 2008, it was 653.8 thousand people. According to research group of the Kazakhstan Institute of Management, Economics and Strategic Research, by 2030, in Astana, will reside more than 1 million 200 thousand people. Indeed Astana is an international city; there are a lot of people of different nationalities mainly from the post Soviet space. According to census data  the largest ethnic group is the country`s titular nation-the Kazakhs 60% of the population of the city,  40% of Russian population, 5.7%- Ukrainians, 3.8- Uzbeks, Germans- 3.0%, 2.6%- Tatars, 1.8%-  Belarusians, 0.8%- Poles, Ingushetians-0.6%, Koreans-0.6%. 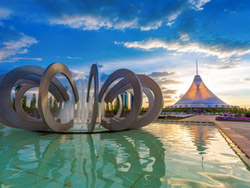 Undoubtedly, the new architecture of modern Astana became true adornment of the city , unrecognizably changed its look. Light avenues, white and blue palaces, fountains, modern office and residential buildings, golden domes of the mosque had been built only for 11 years.  For designing of objects were brought foreign scholars, craftsmen, leading construction companies.

In 2002, in Astana was established a Special Economic Zone «Astana - New City», which provided a favorable investment climate that allowed to attract private investors. In 2006 a strategic plan for sustainable development of the city until 2030 was approved.

In 1999 Astana was awarded a medal and certificate of the winner of the International Competition «Cities for Peace». Since that time, Astana has the name- «City of the World» and, as the laureate of the UNESCO Prize, makes a positive contribution to the formation of an international image of Kazakhstan as a rapidly developing Eurasian state.

In 2013, Astana has been chosen to host EXPO 2017 - the largest international specialized exhibition, which demonstrates the latest scientific and technical achievements, prospects for development as well as the history, traditions and culture of the world’s countries. EXPO-2017 will be a landmark event for Kazakhstan: no international exhibition of such level has taken place in the Central Asian and the CIS countries.

In the VIII century, the territory of Kazakhstan was inhabited by Turkic tribes, who during the summer organized meetings to discuss economic, military and pastoral issues. The headquarters of the tribal chiefs was situated in the territory of modern Astana. Later on this place were held trade fairs, which sold a wide variety of goods.

Internet resources on Astana and Kazakhstan